Network and cable news will be all over this, but I gotta weigh in too. The ultimate comfort , highly processed, conglomeration of chemicals and sweetness, Twinkies, has successfully emerged from bankruptcy. 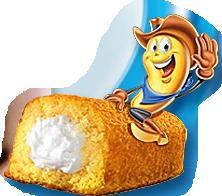 Twinkies were in bankruptcy???

Interstate Bakeries is the maker of Twinkies, and right at the height of the fried Twinkie phenomenon, they declared bankruptcy. My theory is that the Twinkie Lords were askeered that Dewey, Cheatem & Howe or Chang, Poole and Schmidt would sue their fat butts and suck out all their creamy filling. (insert dirty joke) I think bankruptcy was a preemptive move.

Now that we have a national emergency on our minds and change in our future, and the Twinkie Defense is popular again (Sean Penn stars in the movie about Harvey Milk whose murderer got a lighter sentence because of junk food (insert homophobic joke) the Twinkie Masters feel empowered to step  out of the credit-crunch shadows and take their rightful place again.

Welcome back to solvency Twinkies! (insert another homophobic joke)

But Wonder Bread builds strong bodies 12 ways. For Realz! I saw that on the TeeVee all while I was growing up. No lie! (insert ageist joke) Never a PB&J fan, but Wonder Bread makes the best baloney sammich (yellow mustard only!) (insert hillbilly joke) Since I like my toast very light – Nancy calls it “stale bread” – Wonder Bread is the best toast too. Barely brown on the surface, but tender on the inside. (insert racist joke)

So welcome back Wonder Bread too.

And special it is. Something magical occurs when the battered, oblong pastry hits the hot oil. The creamy, white vegetable shortening filling liquefies, impregnating the sponge cake with its luscious vanilla flavor (imitation, but potent….). The cake itself softens and warms, nearly melting, and becomes a buttery and suave contrast to the crisp, deep-fried crust. The piece de resistance, however, is a ruby-hued berry sauce, adding a tart sophistication to all that airy sugary goodness.