This is the kind of news that makes most boomer men sad and then pissed off. It most boomer men’s dream to find a very collectible car sitting in a barn someplace and be able to scarf it up from the owner for a mere pittance.

NEWCASTLE, England, Jan. 2 (UPI) — A 1937 Bugatti that an eccentric English doctor kept locked in a garage for half a century could bring his heirs millions of dollars.

Dr. Harold Carr owned a number of classic cars, including a Jaguar and an Aston Martin, The Times of London reported. But the Bugatti Type 57S Atalante, one of only 17 known to exist, is the pick of the collection. 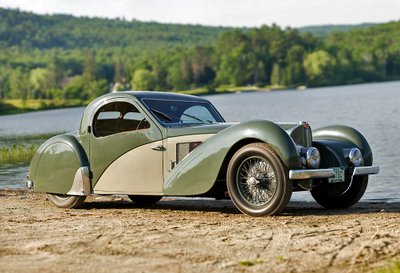 People knew the car existed, people came from far and wide and tried to convince the now dead guy to sell the car. Surely many were motivated by pure greed, looking to snatch the car and resell it. Thats the sad part, they would have made a bundle and I didn’t.

The “mad” part is as many, if not more, wanted to get the car out of the barn before it was destroyed by vermin or disaster. But yet the old coot kept it to himself. He hoarded this great car. I hate it when people have classic cars and keep them locked up. A car is meant to be driven.

I scored some minor victories in my “barn finds”…

Part of the reason I love road trips is to get off the beaten path and rubber neck while I’m driving and look for barn finds.

In retrospect, I should have taken Nancy up when she told me to take some retirement money and get “an old car.” But that ship has sailed, the retirement fund is all but kaput. If only…

But in order to have “an old car” you should have 1. unlimited funds, or 2. mechanical knowledge, both of which I lack.

But I’m still looking behind those barns.