“Turbo Tax! I blame Intuit Turbo Tax”, said the new Treasury Secretary who didn’t pay taxes – or paid them late without penalties – because he failed to pay some payroll taxes on income from a international fund when he had changed jobs twice that year.

That means Mr. Geithner had three sources of income: from the Treasury Department, from the Council on Foreign Relations, and from the IMF.

He used Turbo Tax. I use Turbo Tax. I love Turbo Tax. I heartily endorse and recommend Turbo Tax. Even if it does make a mistake when dealing with payroll taxes earned from multiple incomes, (Geithner) one of which is considered foreign even though it’s in the U.S.

C’mon, whaddya expect for a service that ranges from free to $74.95?

In just a couple Saturday afternoons, I can have my taxes done and transmitted to the IRS. All of the previous year’s history is transferred (this is what got Mr. Geithner in a pickle – Turbo Tax forgot to quiz him on his prior year earnings.) Turbo Tax quizzes the heck out of me and I happily click away and punch in numbers and take deductions and add earnings. Turbo Tax auto-saves regularly, and I can quit and play with the dogs (counted as dependents.)

Did you know veterinary bills can be counted toward your medical deduction? Turbo Tax didn’t know that either. When I write in Dr. All CreaturesPet Care it’s not a problem.

I wonder if Mr. Geithner has any pets?

I love all the deductions I can take for donating junk too. Turbo Tax links to another website that says my old pants are worth $4 a pair! $4! I usually don’t pay more than $12 to begin with. But they are in good shape with just a slight strain on the waistband and maybe a missing button to close the clothes. Shirts? Man-o-man, I think tee shirts are worth $3, I never pay more than $2. Except on special occasions when I actually buy a shirt that fits. XXXLT always costs $4 more than MSRP. I still have all those.

Geithner didn’t have to pay taxes for a couple years because the statute of limitations had run out. He didn’t voluntarily pay the taxes.

My first impression was that Geithner was a dope and hired a dopey tax man. Now I really like the guy. He does his own taxes with the help of Intuit Turbo Tax. And he screws up. Not on purpose.

Remember the Treasury Secretary is in charge of the IRS. The only downside is that Turbo Tax makes it so darned simple to do taxes there is no incentive to simplify the tax code. That would only put a tax preparer ( who looks like Diane from Cheers) and tax-refund advance loan sharks out of business. We don’t need that.

One more thing, did you know that the IRS will pay a reward for turning in tax evaders? 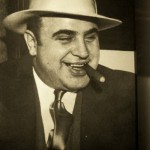 A man with a Fedora and a stogie and a silk tie that cheats on his income tax. Boy, those were the days.

PS: I am away trading bourbon for indian beads and fiber, so don’t send the revenuers after me until next week.