While you were away, two important anniversaries came around and you didn’t even make plans to pop a cork or pop a top did you! Two defining moments for Boomers everywhere, and because I wasn’t at my computer to hound you, you would have just let them slip past on your calendar with no fanfare. I should make you all turn in your Boomer Cards immediately.

That can ultimately spelled the demise of the tin beverage can developed in the mid-1800s. Industry officials say the development of the Coors aluminum can forever changed the way people drink beer and other beverages.

But of course we really know that it’s what’s inside that is truly recyclable. 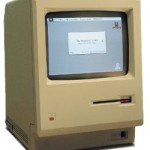 The Mac was the first computer for many Boomers where one could actually focus on being productive rather than learning how to make an application actually work! I won’t rant and rave about Apple and how it sucks that it isn’t the dominant computer in the whole world. Bill Gates is a Prick.

But this was a defining moment in marketing –

Happy Anniversary Seamless Beer Cans and Apple Macintosh. I’ve learned to live without both. But it was fun back in the day!