1. Is there anyone of your friends that you would ever consider having spaghetti with? Sure, all of them.

2. Spaghetti in the morning, afternoon or night? Anytime is good, sometimes with balls.

3. What side of the bed do you sleep on? What does this have to do with spaghetti? If I’m in bed, I’m on the right side, if I’m not in bed I’m on the left side.

4. Have you ever taken your clothes off for spaghetti? Once, in band camp.

5. Have you ever had spaghetti in the shower or the bath? Never, that’s silly.

6. Do you watch/read spaghetti? No, I let others do it and tell me about it. Some blogs I read border on spaghetti, but that’s not their main thrust.

7. Do you want someone aggressive or passive in bed? Whaaaa??? Well, it depends.

8. Do you love someone on your blogroll? Yes.

9. Would you choose love or money? Love, money can be devalued. ie: Zimbabwe $20 Trillion is worth US $1.

10. Your top three favorite kinks in bed? Back, neck, and left knee. 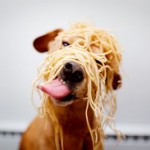 12. Where is the most romantic place you have had spaghetti? Paris, we both had seconds.

13. Where is the weirdest place you have had spaghetti? Lou’s Carnival and Clownlandia

14. Have you ever been caught having spaghetti? Sure! No problem.

15. Ever been to a bar just to get spaghetti? No bar-spaghetti is gross. Have you ever seen their kitchen? Ewww.

17. Have you ever kissed or had spaghetti with someone of the same sex? Of course, all the time. Don’t have to ask me twice.

18. Had spaghetti in a movie theater? No, but helluva an idea. Spaghetti in a bucket. I’d definitely use my fingers.

20. Had spaghetti in a bathroom? Left my share, no doubt about it.

21. Have you ever had spaghetti at work? I think once or twice, in the lunch room.

22. Bought something from an adult store? Yes. It always seems like a good idea at the time, but you get it home and it’ just isn’t the same.

23. Do you own any spaghetti toys? I have a battery powered fork.

24. Does anyone have naughty pics of you or are you on film? Lots. Mostly when I was younger and in better shape.

25. Have you ever had spaghetti with someone and called them the wrong name? Often, but they don’t seem to notice or if they do, they don’t mind.

26. Do you think oral spaghetti constitutes as a form of intercourse? What other kind of spaghetti is there than oral? I am so behind.

27. What’s your favorite spaghetti position? Sitting. Otherwise I get it all over me and sometimes on others.

29. Have you ever had spaghetti with more than one person at a time? Regularly. I seldom have spaghetti alone.

30. How many Sunday Stealing players do you think will not post this meme this week? Not nearly enough.

BTW: 19 is missing, I think there is some kind of social taboo connected with that number.