When I was a young lad, my family’s best friends were Rubened. Ruby and Eddie Hodge. Rubened to every one. They even signed their Christmas cards Rubened. Eddie went to a business school to become an accountant and one of the requirements was exquisite handwriting. My Aunt Morna attended the same school and their handwriting was very similar. Eddie always signed all the Christmas cards and correspondence with a big flourish Rubened.
His handwriting fit his personality. Eddie was the anti-accountant outside of work. He was a joke-teller extraordinaire. He always had a joke, some new, some old, some hilarious, some corny. But when Eddie told a joke, everybody laughed.

Including Eddie.
Eddie understood that you weren’t supposed to laugh at your own jokes, but he did. Mightly, and he had a contagious laugh, so the laughter kept going for a few beats more than the joke deserved. Ruby heard the same jokes over and over and over. But she always had a huge smile on her face and giggled at the punch line. She loved seeing Eddie having such a great time.

Today another entertaining friend arrived at my door. 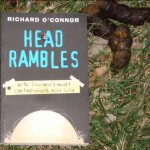 Head Rambles, the book, is like Eddie. I’ve read Grandad’s blog for a couple years. I felt like I knew Grandad personally and laughed out loud at the “most cantankerous auld fellow” and his life in Ireland, with Herself, Sandy, Laughing Boy, K8, and others that wandered in and out of his writing.
He is quite the sportsman too. Regularly taking potshots at passing tourist buses.

The gunfire sounded interesting, so I went down to the village to get the paper. Sure enough, the villagers had caught themselves a tourist bus, and the tourists had tried to take refuge in the church. That was foolish, because everyone knows our church is closed on a Sunday.

Grandad, kept his identity a secret. It must have been difficult for him to actually put his “real” name on the cover of the book. (If that is his real name.)

Like most of us, he slowly revealed parts of his life and his families lives and like most humor writers, seems to have suffered his share of life’s pains.

But mostly Grandad just fires off the top of his head. (Picture that!) Somebody or something is always pissing him off.

I pondered this as I stood there on the doorstep, stark naked. Wouldn’t I look a right prat wearing a hard hat and nothing else? I told him to fuck off, and went back to bed.

‘Who was that?’ says Herself from under the duvet.

‘Those fucking builders you ordered,’ I said as I decided whether to get dressed or not.

‘Dunno,’ says Herself, and she went back to sleep. Lazy bitch.

Did I forget to mention that Grandad lives in dream state most of the time? If he called Herself a lazy bitch to her face, I’m sure he would be two balls short of a juggler.

Grandad fancies himself to be a golfer, he practices a lot – usually with Sandy’s turds aimed at the neighbor’s home. This is the blog post that cemented Head Rambles in my RSS feed.

Then I remembered our K8’s idea about using dog turds. So I brought in a pile from outside the gate. They were nicely sun-dried and ripe for driving. All I needed was a target.

Our neighbour put up a rather ugly extension some years ago that blocks part of our view. I always hated that extension. But it made a perfect target.

If anyone is interested, dog turds are much more aerodynamic than pine cones. I could aim straight and true. The neighbours extension now bears a remarkable resemblance to a large Jackson Pollock. It looks a lot better. As long as the wind doesn’t blow from that direction. 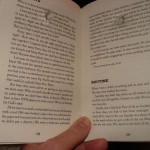 I was glad to have an old friend drop by and entertain me again with his tales.

Just that damn bullet hole makes it awkward to turn the pages.

Buy Grandad’s book, he shouldn’t be launching turds at his neighbor’s home. He needs some balls.