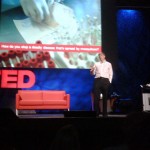 Bill Gates tried to infect some of the world’s brightest minds with Malaria at the hoity-toity geek-a-thon called to those of us on the outside as TED. (Technology, Entertainment and Design.)
This is the same Bill Gates who has released millions of bugs on the general population while he was running Microsoft.

Ending malaria is a particular passion of Gates’s, whose Bill and Melinda Gates Foundation has spent millions fighting the disease. But he apparently didn’t feel like TED attendees were taking the threat seriously. “Not only poor people should experience this,” Gates said as he let the bugs loose on his audience

Not surprisingly, Bill Gates screwed up this release too, as the mosquitoes needed to be upgraded after release because Bill Gates released mosquitoes that did not have malaria.