Can you hum the theme from Friends? I’ll Be There For You? Who wrote it? This is causing a kerfuffle between St. Todd DeCubbville (SIL) and myself. If you said I’ll Be There For You was written by The Rembrandts, you would be on the side of St. Todd DeCubbville. If on the other hand, you knew my new good friend, Allee, you would know that she wrote it. That and a dozen other hits that you will recognize after the first few bars. Her songs have sold 50 million records.  Visit her website to hear clips.


Yeah, those songs! Did they take you back to the days when MTV actually played music videos? Allee also co-authored The Color Purple Broadway show. She has some serious chops.

I’m hoping my new music video, “Hey Jerrie”,  might capture your imagination.  Not only because I’m a boomer who’s going strong but my partner in the video, Jerrie Thill, is a boomer plus – a 91 year old female drummer on an oxygen tank and going stronger than ever.

I tell Jerrie to think of the tank as a fashion accessory – jewel the carrying case so it looks like a shoulder bag or build a cart with fins and chrome and roll it around like a doll in a kiddie car. I also tell her that she’s got the ultimate hook in this Age Of YouTube. How many people making contemporary music videos have tubes jutting into their nose? 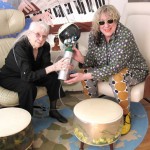 What a party that will be. Allee throws quite a do. Check out her New Year’s Bash. I’ll be posting the video as soon as Allee sends me the embed code.  Watch for it Friday (or Saturday depending on when the party ends!)

PSS: St. Todd DeCubbville remains unconvinced. I have yet to hear him admit he was wrong.