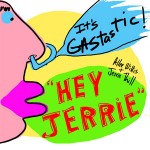 Boomer and a Half Jerrie Thill, and her Boomer buddy Allee Willis are having a fantissimo LA Thursday night bash. The occasion was the gasification of Jerrie.

Jerrie is 91 and has been a drummer all her life. She led her own all girl bands for 60 years. Like most of us Jerrie didn’t have the image of herself dragging around an Oxygen tank to avoid the inconvenience of death.

Her buddy, Allee Willis, encouraged her to embrace her gas (that may be my new mantra) and bling out the tank or haul it around in a kiddie car.

My way in life is to deal with circumstances in the most spectacular way possible. The bottom is as much an opportunity for change and empowerment as the top. Which means that if you can’t breathe without the tank, make that tank work FOR you and not drag you down like the annoying and potentially humiliating chunk of steel and gas that it is.

Allee also made a super cool video for her 91 year old Tanker. Hey Jerrie which debuted at the party. If you know someone who is tanked, forward the link (or this post) so they will see the first drummer to embrace her tubes. Allee, in her illustrious career, has probably seen her fair share of stuff go up musicians noses. Nice that she is helping out one that is putting the right thing up her nose – a tube from a tank.

Check it out dawg…

Had a totally triumphant party last night at ghettogloss, to launch “Hey Jerrie”, my latest music video with me and Jerrie Thill, my favorite 91 year old female drummer/singer on an oxygen tank. I would have woken up and started to get photos up here but I looked at YouTube and the video has EXPLODED. Close to 25,000 views in the first 24 hours and it’s on 37 charts around the world.

Apologies are in order: I wrote the above post before I got the video embed code so that once I had it, I could quickly get it active. In my haste and brain fog, I referred to Allee Willis as Allee MILLER. Where that came from, I’ll never know. But I apologize to Allee for getting her name wrong through the post.