I don’t know either, but he started his career in 1970. So I’m gonna say he’s Sixty. Yup, he’s a Baby Boomer, maybe even on the older edge of being a Baby Boomer. 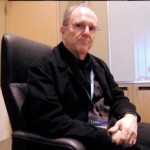 A tech blog did a long interview with Craig Mundie whose title is Chief Research and Strategy Officer for Microsoft. His job is to sit around and daydream.

Mundie is a living portal of future technology, a focal point between thousands of scattered research projects and the boxes of super-neat products we’ll be playing with 5 years, 20 years, maybe 100 years from now. And he’s not allowed to even think about anything shipping within the immediate 3 years.

Long, long interview. Never once asked his age. And why is that? This guy is in charge future-creation for leading technology company in the world and he’s old, but it’s not part of the story?

He is setting the path for a future he won’t see.

It’s age discrimination. The Xer’s at Gizmodo are afraid that they may be wrong about Boomers not being tech-wise.