The BATV (BigAssTeeVee) is sitting on the floor in our living room, the wall mount and some cables have arrived, the Dish Network has been ordered, and shortly the Dell computer/media center controller will arrive.

Our Smart car is in Louisville and we’re picking it up today. I’ve sold some shares of CXW, CHK, DGW to add to our tax refund to pay cash for the car.

We are decimating what is left of my so-called retirement portfolio. I used to care – five years ago – when there was a glimmer of hope. But thanks to Dubya and the SEC, it’s hopeless now.

I’ll probably keep enough with Schwabbie to buy a nice tent for Nancy.

We’re not alone. Baby Boomers just got killed by the recession.

Quite simply, most of the largest generation of Americans ever will not be able to retire. The only assets that are not considered are the value of defined benefit pension plans, which in any case have become quite rare in recent years. While I have been writing about this in general terms for a while now, a recent paper available here: http://www.cepr.net/documents/publications/baby-boomer-wealth-2009-02.pdf puts some actual numbers on the problem.

Here is the heart of the matter.

Most rules of thumb say I should have a million bucks in the bank, and that probably holds true for most Baby Boomers (at least those of us who don’t have a nice defined pension.)

The graph below shows the net worth of people aged 55 to 64 versus where they were in 2004. It projects their net worth at the end of the year under 3 different scenarios for housing prices, and assumes that the S&P 500 stages a very nice rebound from where it is today (but flat from when they were writing the paper) by the end of the year, finishing at 823. (Today it’s about 750.) 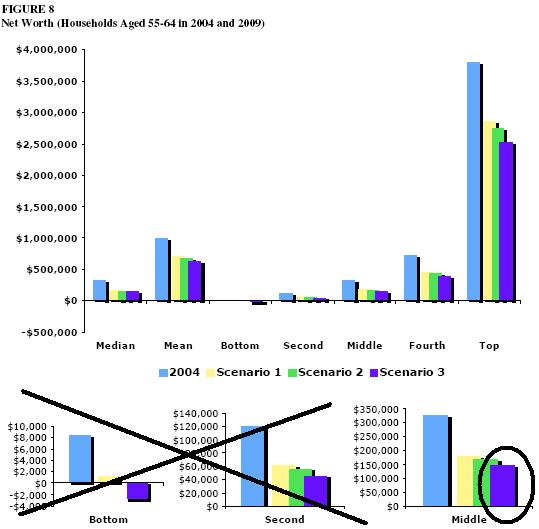 The author of the graph says look at the purple bars and ignore the blue and green.  When doing financial planning, I always look at the “half-empty” version which is the darker purple.

So the people in the lowest 20% owe more than they own today. These people are screwed. They are underwater on their homes, no retirement money, and have credit card debt. Screwed.

That’s not us yet.  But we’re working on it.

If we don’t sell Nancy’s old car we’ll have some credit card debt that won’t get paid off. 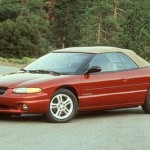 lady back and forth to the golf course. $5,000 obo. Contact GoingLikeSixty@gmail.com.

Will deliver to anyplace in southeast U.S. free.


Costa Rica is looking mighty inviting, unless you start clicking the hell out of those Google ads!

As a percent of 2004 net wealth, the losses are much heavier at the lower end of the wealth ladder.
The bottom 20 percent of households aged 45-54 in 2004 had little wealth—only $3,500 on average.
Five years later, the bottom fifth of that age group are projected to have average net wealth of negative $2,300. The second quintile is expected to have 54 percent less net wealth than in 2004, the middle quintile 42 percent, and the fourth quintile 35 percent. The top quintile, averaging $2.5 million in 2004, is expected to have net wealth 35 percent lower in 2009—almost $900,000 less per household.

The author of the analysis says that this does not bode well  hotel companies like Starwood (HOT) and Marriott (MAR). They will not be buying RV’s from Winnebago (WGO).

This points to very serious long-term problems for the economy and should cause any recovery to be extremely anemic. The Baby Boomers are going to have to dramatically raise their savings rates. The older boomers — those on the verge of retirement — are not going to be doing the things that we currently associate with retirees.

Nope! He got it wrong.  Baby Boomers are going to have to drastically increase their spending rates. Those of us on the verge of death/retirement can save the world (again) by boosting consumer spending.

Somebody has to do it!