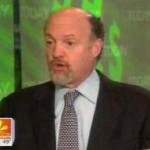 I used to be a regular watcher of Jim Cramer’s Mad Money. That’s back when I had more money in the market (didn’t we all?) and was enjoying watching my money grow. We never made a purchase based only on his shouting, but it was encouraging to have him tout a stock we owned.

I never sold a stock based on his shouting, either. Apparently, lots of sheep followed his every move and comedian Jon Stewart decided he would be the arbiter who is at fault for the recession.

He decided it was Jim Cramer.

Cramer was on the Today Show talking about Stewart’s indignation that Cramer didn’t save us from the recession.

How did the Mad Money Mad Man react when Meredith Vieira said:

Here is is classy explanation when he told Stewart he would try harder.

“That was an attempt, as it was throughout the interview, to take a high road, which I was brought up to think was a good thing to do,” he said. “Sometimes high roads aren’t well greeted in the media. But I believe that you should always try to do better.

He took the high road.