Grandma Henke wrote a post about her first car, a Ford Anglia. At first glance I didn’t remember such a car, but after taking a look at the wiki, I remembered that early 1940’s Anglias were the preferred body for Gassers! Gassers were Anglia bodies put over supercharged V8 engines for quarter-mile drag racing. This was not Grandma Henke’s Ford Anglia! 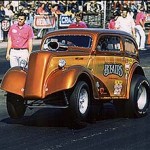 Boomspeak has my recollection of my father’s Oldsmobiles, one of which I raced on the dragstrip and later almost died in… his 1963 Oldsmobile two door Delta 88 was a real sleeper. 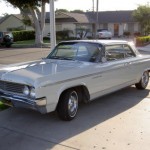 I would drag race it on Saturday night at Milan, MI. In those days the class to compete in was horsepower to weight ratio. I raced I/Stock Automatic. I won a very nice trophy one on of my trips.

About that trophy. It was about three feet tall, but of course, I couldn’t take it home for the mantle. A teenage boy isn’t supposed to race the family’s grocery getter. I convinced Nancy that she should keep it at her house. This arrangement worked really well, she even got to put in on top of their stereo (because they didn’t have a mantle.) I got to visit it every Saturday when I picked her up for our date.

Nancy’s mother announced one day that my mother was coming to her house to play bridge and the trophy had to go. Not just put away, she wanted it out of the house. I grabbed the trophy and threw it in the trunk and we left for our date to go neck at the drive-in.

Sometime that week the trophy ended up in our house on the dining room table. I had forgotten all about it and Mother found it when she went to put groceries in the grocery getter.

I was grounded for a couple weeks and told that any repairs as a result of my racing would put a dent in my allowance.

It did answer one question for my father. He always wondered why the left rear tire wore out so much faster than the others. (This car did not have posi-traction as explained by the cutie in My Cousin Vinny.)

Mona Lisa Vito: The car that made these two, equal-length tire marks had positraction. You can’t make those marks without positraction, which was not available on the ’64 Buick Skylark!
Vinny Gambini: And why not? What is positraction?
Mona Lisa Vito: It’s a limited slip differential which distributes power equally to both the right and left tires. The ’64 Skylark had a regular differential, which, anyone who’s been stuck in the mud in Alabama knows, you step on the gas, one tire spins, the other tire does nothing.

Dad took his car to Kyle’s Mobil Station for all his service work. I worked for Kyle. Kyle didn’t let my dad know that there was an exhaust cutout installed on the car (noticeable only when the car was on the rack getting the oil changed.)

Everybody should work for a Kyle if they are racing their Father’s Oldsmobile. Remember that Grandma Henke.