This is good news.

$5 has now become the defacto base price for a large, pepperoni pizza. I thought this may have been just a local phenom, but it was confirmed today that pizza in Idaho is $5 for a large.

A teacher is advertising pizza on test papers. The featured pizza is $5. 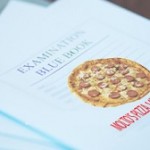 A while back Smallburg Godfather’s Pizza had what I thought was a one day only deal of $5 from 10 a.m. to 5 p.m. I made it by 4:45. Then a big ad appeared in the newspaper that featured large pizzas from Little Caesar’s for $5 anytime, along with some other coupons for lunch specials of $5.

It’s about time. We had stopped ordering Pizza when the price hit $20 for a large, thin, pepperoni and mushroom, pizza. $5 is good.

But I just want one pizza.

Hope Pizza Hut and Papa John’s get on the stick.

I still have one more notch to go on my belt.