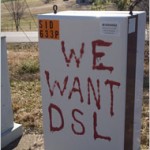 The Fresh President has picked a guy to watch over the internet. Julius Genachowski will be the next head of the FCC. His credentials seem to favor those of us who value open and unfettered access to the internet.

Julius is an outstanding choice for FCC Chairman. As the architect of President-elect Obama’s Technology and Innovation Plan, it is clear that he understands the importance of open networks and a regulatory environment that promotes innovation and competition to a robust democracy and a health economy.

But as long as  Connected Nation is lurking in the home state of Senate Minority leader Mitch McConnell I can’t be as optimistic as the founder of Public Knowledge:

Thus, I am certain that he will seek to restore public confidence in an agency that has had a long history of opaqueness, industry capture, and a lack of data-driven policymaking.

Senator McConnell will be pushing hard to get that stimulus earmark money flowing into Kentucky.  And that means he will be pushing Connected Nation to get $350,000,000 for making a map.

I hope Genachowski hammers the telecos and cablecos to turn over data that they have previously withheld. The U.S. has fallen further and further behind under Martin, the Bush FCC chairman, and it’s going to take a massiv amount of commitment and energy to get us back to a leadership position in the world.