RCA Victor released “Texarkana Baby” b/w “Bouquet of Roses” by Eddy Arnold. The first 45rpm record to hit the Billboard charts was “A — You’re Adorable” by Perry Como, listed on the charts on May 7, 1949. The next week, the year’s biggest hit appeared on the Billboard charts — “Riders In The Sky (A Cowboy Legend)” by Vaughn Monroe. The first 45 rpm records were monaural and as stereo sound became more prevalent and popular in the 1960s, almost all 45 rpm records were manufactured in stereo. 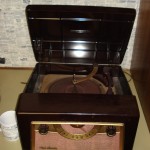 This isn’t my record player. It belonged to my aunt. It’s an Admiral radio/record player and would probably work if it had a plug on the end of the cord. The finish is Bakelite which attracted me to it.

As with most record players it handled three different formats. LP or 33 1/3 rpm, 45 rpm (the seven inch record), and 78 rpm. I didn’t have a “portable” player like the Admiral High Fidelity. I played records on a monster console radio/record player.

I didn’t own records, I played what my parents had until I got to college and then I listened to my roommate’s collection of LP’s. But I had one of the early transistor radios, so I had a tiny cool factor.
It puzzles me why people buy music.
Nancy’s Smart has a plug for an iPod, so we checked it them out at Target. For fifty bucks, I can buy an iPod the size of a book of matches and it will hold 250 songs. Two hundred fifty. I don’t know 250 songs. Don’t songs cost 99 cents from iTunes? So she’s going to spend $250 on music to play in the car while she putts to the golf course?
I get not listening to earthbound radio with all the commercials and station breaks. I think I would like satellite radio if it didn’t cost so darn much.
See where I’m going here?
Pandora.com – music deserves to be free! Pandora has added lyrics! I may be able to figure out what Lady GaGa was singing on American Idol.

Seems like the smarter play would be to get an iPhone, stream Pandora.com, and plug that into the car speakers. Wait, did I just replace a $50 iPod with a $400 iPhone? Somebody figure the cost/benefit/ROI/payback on this idea quick.