We’re having a blast with the Smart. Can’t go anywhere without getting a lot of thumbs up and waves. If we stop, we always have a couple people hit us up with questions:

By then we usually are standing beside the car and will invite them to take a look inside. Some even have taken us up  on the offer to have a seat. They are all flabbergasted at the room inside.

One question totally befuddles me:

What I want to say: No, dipshit, I bought a car I intend to smash into another, much larger vehicle, as soon as I can and die a slow painful death.

Nancy has a friend who refuses to ride in the car because she is afraid she will die. She would rather take her mini-van. Aside: That’s OK with Nancy because she was the designated driver for long road trips because she is a trucker at heart. She doesn’t mind driving and her friends kinda freak out on road trips.

Speaking of which, have you seen the vehicle that is going to save GM? 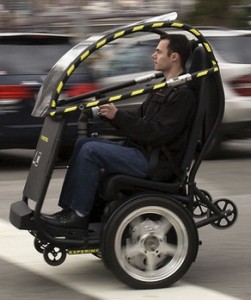 Yup, that’s it! It’s called the PUMA, or Personal Urban Accessiblity Project. (Shown here almost actual size.) GM, the forward thinking car maker that brought you the Hummer, now has teamed up with the super-successful (not) Segway that was going to change the whole freakin’ world. Remember the buzz about the Segway?

“…bigger than the PC…might be an antigravity device…” Now, it’s most recognized as a way to transport Paul Blart, Mall Cop.

Can you say Unsafe at Any Speed? They have tuned this PUMA to reach a top end of 35 miles per hour! Yah, hah. When your head is the roll-over protection your knees are the crumple zone, I think the Segway speed of 12 mph is about right.

I can’t wait to send GM more of my tax money to see what they come up with next!