My daughter lives in Florida, so a year or so ago, I bought the Magic Jack gizmo figuring I would save some bucks if that was the only time I used it. Turns out I used it a lot when calling Boompa in Bangladesh to troubleshoot my wireless router. No toll-free number? No problem. (It was a U.S. number, international calls are not free, but close.)

Originally I had it installed in my desktop where it chugged along just fine. Read the details here.

The Magic Jack basically was trouble free for the time I had it.

When it came time to renew, I was involved in other things and ignored the popup window asking me to renew.
Since I do most of my Magic Jack calling outbound, it didn’t matter to me that there were no local numbers in our area code.
So I chose Boca Raton Florida because that had a nice sound do it.
Plus it freaked out people when I would call and they saw the Caller ID.

I had my fun, but didn’t renew until I found out Magic Jack has vastly improved their number of area codes and cities so that the gadget can be used for both inbound and outbound calls. I moved Magic Jack to a laptop and renewed their service. Changing from my original number to the local number was free and a snap.

But having a local number sure makes it harder to make those harassing phone calls. 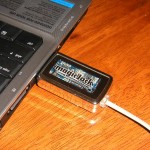 I’m not paid anything to push Magic Jack. If ads appear on the site it’s because Magic Jack pushed them here through Google Ads.