Michelle Obama and The Fresh President have ditched another pledge and are getting a dog from a puppy mill.
The dog’s original owner returned the Portuguese Water Dog to the kennel where it was bred.

The Obamas decided that keeping Ted Kennedy happy was more important than keeping their pledge of adopting a shelter dog.

The puppy mill where this dog came from is where Kennedy buys his dogs. 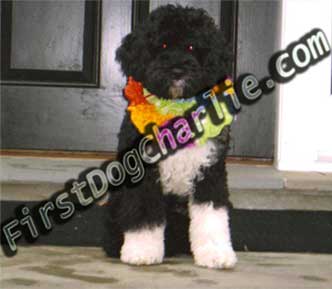 This really pisses me off. This was so simple. Four million dogs will be killed this year because they don’t have a home. The Obama’s had set expectations that they would set a great example.
Instead, they buckled to pressure from Uncle Teddy and are accepting a gift dog from a puppy mill.

Obama has taken Chicago politics right with him to the White House: tell the public what they want to hear, then do whatever.

I’m surprised that Michelle didn’t live up to her promise. I bet that those vegetables from the garden in the back yard of the White House never see the White House kitchen.

Forget all the tough decisions, this was an easy one, and President and Michelle Obama blew it.

They say they will change the name of the dog from Charlie, so at least the website that grabbed the domain will have a short life.