About 10 years ago, I had the chance to buy a McLaren F1. A new one was almost a million dollars. This was a secondhand car with less than 2500 miles, and it was $800,000. I thought, it’s crazy to spend that much money on a car. So I talked it over with my wife. And she said, “You’ve worked hard. If you want to get it, get it.” And I thought, ohhh … kaaay! So I bought it. Last year, a McLaren F1 sold at auction for $4.1 million! I now realize this is the greatest investment I’ve ever made. In less than 10 years, I more than quintupled my money.

But Leno’s advice is to buy a car because you love it, not because you think you can make 5 times the investment in a few years. I still love to ride the back roads and rubberneck looking for “barn finds.” I’ve inquired about a few, but the owners always have the image of their beat up 1987 Corvette selling for enough money to pay off the mortgage on the double wide. Or the 1952 Dodge coupe that has no interior and no glass paying for their next set of dentures. It’s discouraging because I know those cars will 1. continue to rot away, or 2. eventually be hauled to the scrap yard.

What are Leno’s picks from the current crop of cars to be collectible? Think ordinary, plain, average, simple, even ugly!

That’s why I think the Mazda Miata will be the ultimate affordable collectible by, say, 2025. The first-generation Miata was extremely simple, and that’s part of its charm.

Miata made a cute car! But how about the Ford Taurus? Cute? Not really, but collectible because of it’s roundness which was unusual for the time and lots of people owned them. Would you buy a Pontiac Aztek?

Not many people did.

Nancy thinks they resemble a tennis shoe on wheels. 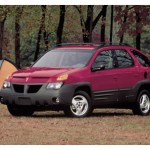 Leno likes it because it is “odd and weird” like the old Pacers and Gremlins.

How about a Chrysler LeBaron K-Car with the fake wood? (we had one which was broadsided with oldest daughter driving.) Collectible according to Leno.

Leno even likes Hummers and blinged out Escalades for future collectibles!

One last collectible? It’s any car your girlfriend thinks is cute. A ’79 Ford Fiesta? “Oooh, look at that little thing!” It’s seen as a cute, desirable city car. The new Smart cars will always be collectible. Minis too. Things don’t change. If a woman was cute 20 years ago, she’s cute today. The same is true for cars. 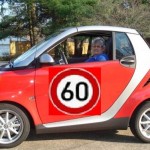 My cute girl in her cute car! Both highly collectible. One will be collecting Social Security in July.