Janna was driving while singing 2nd movement of Mozart’s K447 Horn Concerto.
Now that in and of  itself isn’t hilariously funny except, that piece of music has no words, and I know where Janna lives and she could drive all the way across town in the time it takes to sing along with that movement.

I guess you had to be there.

After a afternoon of flogging a ball around the golf pasture, we went to Smokey Bones for grub. As usual with Varley and Chickie, the talk turned to vodka and beer and wine.

Varley told me about Blue Moon beer since he thinks its odd I drink Miller Chill. I think he’s trying to wean me off the sissy beer and on to something more manly.

Which lead me to these seriously weird beer names.

– Fiddler’s Elbow – is a wheat beer from the UK named for a tiny village in Wales.

– Old Speckled Hen –  story has it that the men who once built MG cars used one particular vehicle to drive around the factory and called this particular model the ‘owld speckled ‘un’. On the famous car’s fiftieth anniversary, the brewery decided to commemorate the occasion with a beer called Old Speckled Hen.

– Moose Drool – from Montana was inspired by a picture of a moose drinking from a lake.

– Santa’s Butt Porter – a large barrel is known as a butt, the place where it is filled is the bung hole and therefore we all have been endowed by our creator with a bung hole in our big barrels. 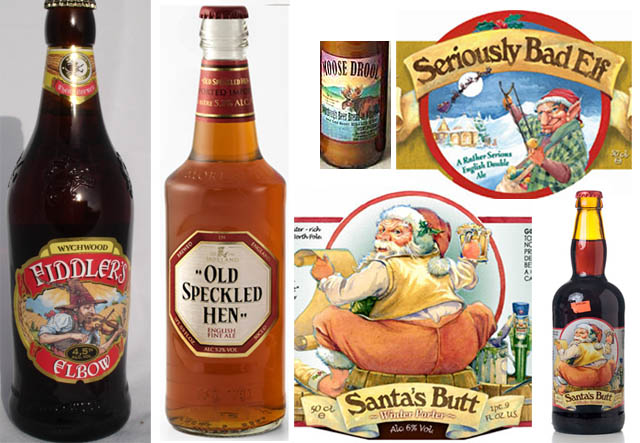