So far the baby bunnies I touched today are running ahead two to one. 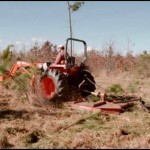 Three baby bunnies were run over by the Whirling Blades of Death, one didn’t make it. Two did.

Bush-hoggin’ is real man’s work. I don’t know the details of how the other two escaped to be given to a young lady, but they did.  Most Bush-hoggers I know, would have backed up and creamed all the bunnies. Creme de la Bugs.

The local Humane Society takes wild bunnies and rehabs them and then sets them loose to feed the foxes. Circle of life and all that. She was willing to buy them back when grown, but apparently you need a license to raise a wild animal in Kentucky.

Those two bunnies are all safe and snug in a warm and caring place.

Do bunnies really need both ears to survive in the wild?

I’m asking because I’m guessing they do. 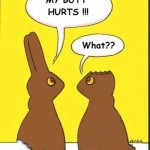 Wandering around the finely manicured bluegrass at The Sixty Ranch is another baby bunny with one ear missing.

Apparently I did a fine job of buzzing it off with the mower. I was doing some trimming and saw the bunny creeping through the grass.

Kewl, I says to myself, three baby bunnies in one day. That’s pretty neat.

Until I got close enough to pick it up and noticed the bunny had a missing ear and bloody noggin. I didn’t pick it up.

Yeah, I mowed off the poor thing’s right ear.

I left the new one eared hare for the Mama or the neighbor’s cat to take care of.

I would like to start a bunny hospital, like the bird hospital in very Northern Michigan, but I believe in the Circle of Life: even when it involves Whirling Blades of Death.