Bill Gates, the richest man in the universe, decided that the exact hunk of  Wyoming – the same place that some monks wanted to cloister themselves (is that still legal in Wyoming?) –  is a vast spread of Wyoming he wants.

The monks have been trying to raise the almost $9 million it would take for them to live on the few hundred acres near Yellowstone to be alone.

Instead Bill Gates swoops in with Thousand Dollar Bills flying from his underwear, like Underdog, and snatches this pristine land from these peaceful God-loving men.

In a solitary monastery under the Rocky Mountains in northern Wyoming, the Carmelite Monks of Wyoming seek to perpetuate the charism of the Blessed Virgin Mary, living the Marian life as prescribed by the primitive Carmelite Rule and the ancient monastic observance. This new monastery of contemplative monks lives a life of faithful orthodoxy to the Magisterium, where joy and peace abound in a manly, agrarian way of life.

Take a look, and tell me who belongs more to this land… The Dark Lord Bill of Prickdom, or the Carmelite Monks of Wyoming. 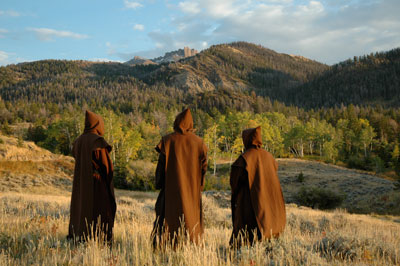 Aside from the fact that the monks blend in too much and might get mistaken for a trophy elk, who could argue that these men belong here.

Even Buffalo Bill, who used to live on the Lake Irma Ranch, would agree.

So Nerdy Bill Gates is a two time loser on this deal. He buys land out from under a cult of religious fanatics and it’s land once owned by a revered American hero.  Has Bill Gates ever toured with somebody like Annie Oakley and Sitting Bull?

No, he plays bridge with rich old white guys.

Here’s how one of Bill Gates future neighbors put it:

“What a drag they are on the rest of us who would simply like to be invited up for dinner occasionally. I for one just wish them and all the tourists and the oil companies would leave here and let us work toward being like Medicine Bow, or Burgess Junction, or Powder River. “

Usually the rich are good care-takers of the land. But in this case, Bill Gates is a Prick.

Carmelite Monks would have been best care-takers of this land.

I sense a road trip coming on.
View Larger Map