Boomers and raised the trophy generation. And the Xer’s are making it worse.

If you have kids, and they attended public school or participated in any activity, then somewhere you have a “Hooray for Me” wall, or if you are empty-nesters, you have (or had) a couple boxes full of plaques and trophies.

Do you recall how much they all looked alike? 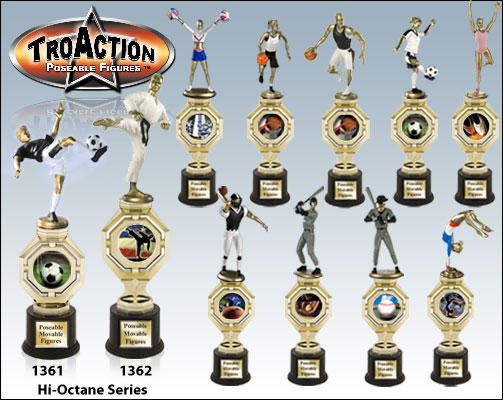 The “Hooray for Me” wall would be covered with 7 inch high trophies for “participating” in a sport. Twelve inch high trophies were awarded for third place, championship trophies could be a couple feet tall. All plastic, all just variations on the same theme.

When my neighbor leaves his garage door open, I can see the trophies they have stored. There a half-dozen that are six feet tall. The kid rides dirt bikes. He may be good, but he’s not that good.

Ribbons with gold plastic circles are hot. The whole Olympic ceremony deal, except there would be eighteen dozen seven year olds, each getting a ribbon around their little necks.

God forbid if the applause died down before every one had their ribbon.

Instead of meaningful mementos, the plaques and trophies have become meaningless crap.

A blogger referred to the current state of organized youth baseball as “self-esteem ball.”

This is a trophy.

A loving cup. Maybe having a cup that has it’s heritage based on chugging booze isn’t quite appropriate for youngsters, but what they don’t know, won’t hurt them. 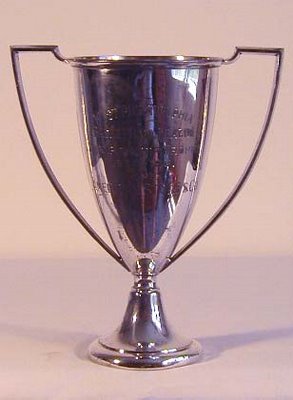 When I walked in the house with it, my shocked mother accused me of stealing it.

You’re darned right. A real trophy is something your mother thinks you stole because it is so beautiful, so unusual, that you had to prove you earned it: your name was engraved into the silver.

While industrial designers (and design students) spend their days thinking up more beautiful and efficient ways of making almost everything, I have yet to meet a single one who cares about the state of the common trophy.

Isn’t that a shame?

At the NASCAR race in Nashville, the winner knew how to celebrate. He smashed the “trophy” into pieces.

In the weirdest victory celebration in the nine-year history of Nashville Superspeedway, Kyle Busch dashed to pieces the $2,000 hand-painted Gibson guitar that is the track’s trademark trophy following Saturday night’s win.

Busch afterwards explained that he wanted to celebrate “rock-star style,” and had told his team beforehand that if he won he planned to smash the guitar. Busch said everybody breaks guitars “except race car drivers. Those sorry saps take it home in one piece. I’ll break it up and share it with the team.”

Sam Bass, the designer of the guitar stood quietly by, almost moved to tears, as his “art” was smashed. Guess what, Sam, this is how the “trophy generation” treats trophies. They are meaningless pieces of junk. Get over it.

The Stanley Cup, the trophy for the champions for the National Hokey League (are they still playing?), gets to spend time with each player. Let your mind wander a little about the possibilities.

Maybe if I had a “Hooray for Me” wall, I would feel different.

It’s never to late to start.

I believe from research, that this loving cup, trophy was given to volleyball team/player from the African American Arkansas Baptist College ( Ministers Institute ) founded in 1884.

Nobody would know the difference.