Do you resemble the any of the people in Twilight? (Except you would be older – because Twilight is about teenage vampire sex and angst. People who read this blog don’t have any of those.)

I like it, and recommend Twilight computer use – outside. Did I forget to mention I meant blog outside in the Twilight?

Now that the evenings are in the mid 70’s, it’s the perfect time to drag your laptop outside and find a place in the shade with a nice breeze and give it a go.

I’m sitting in the NASCAR/Cigar Bar right now with Sedona laying a few feet away, nose and ears twitching to catch every scent and sound.

It’s not twilight as I write this, it’s about noon, so it’s closer to 85 degrees, but the breeze is wonderful.

I’m catching up with reading the Sunday Stealing Memes and dropping little turd comments all over the blogosphere.

Battery is at 38 minutes, which is great. It will force a shutdown soon. Twilight blogging/reading should not go on for hours.

Even in the shade I found there is one required purchase: a shade for your laptop. If you are handy you can make one… I bought this… 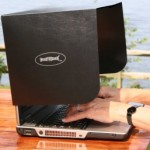 Before the shade, I spent a lot of time hunting for my cursor. I thought about downloading an app that would make a giant cursor, but that probably would also load me down with malware.

There still is a pretty bad reflection off the screen, but not so much that I can’t handle it in the shade. In the bright sun, I’m dead. Just like the Vampires of Twilight.