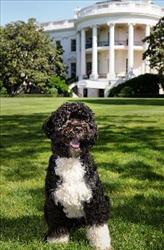 Look at that face! Bo Obama is now my favorite Obama in the White House. I forgive Bo for not being a pound puppy, he can’t control who buys him.

Dogged by demands from his fans, Bo now has his own trading card.

I can’t wait until I get my Bo Obama trading card.

If you want your very own Bo Obama trading card with lots of vital dogtistics, send your request and a SASE to Mrs. Obama’s office.

Bo Obama loves tomatoes (what???) and toys (duh.)  Bo says his goal as first dog is to

Other details from the Bo Obama Trading Card

Hobbies: Playing on the White House lawn and going on walks

with the Obama family

Favorite exercise: Running (and then napping near the

Bo was a gift to the Obama family from Senator Ted Kennedy and his wife, Vicki.

Even though Bo is a Portuguese water dog, he doesn’t know  how to swim.

Send your request for your very own puppy papers to: