I sure hope they keep this little prank in Amsterdam and it doesn’t invade the U.S.

Seems “Smart tossing” is the hot new activity for buzzed out Amsterdam youth. They toss Smart cars into the nearest canal.

A similar conversation took place at Varley and Chickie’s home last evening. Bob and Felicia had taken a ride through the Kentucky version of the hood, which is a very diverse neighborhood of Mexicans, African Americans, Bosnians, Vietnamese, etc. etc.

Nancy said she would take Chickie there someday since she had never been. Bob suggested that she shouldn’t drive her Smart. “They would pick you up and carry you off.” 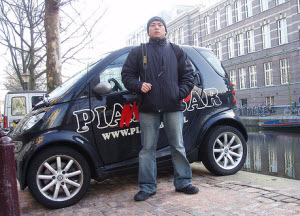 According to locally-published newspaper De Telegraaf police has not wanted to publicize this form of vandalism for fear of copy-cat incidents. However, police officers are paying extra attention to Amsterdam’s canals, especially during the weekends.

The Smart cars are small enough to be parked with head or tail pointing to the water.

One man who parked his Smart car that way said police woken him with the message that his car had been pushed into the canal.

“Several weeks ago the same thing happened to my companion’s Smart,” Casper de Jong said. “In both cases the Smart was declared a total-loss.”

Alongside most canals a low guard rail helps prevent cars from taking a dip, but the Smart car is small enough to be lifted and tossed.

It is not clear how many Smart cars have been vandalized this way, but an employee of Smart Center Amsterdam confirmed the company has recently been confronted with it ‘a number of times.’

Shouldn’t be a problem here in Podunkyville: