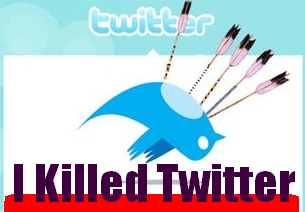 I just killed Twitter. Not the whole thing, so if the Fail Whale shows up today, don’t blame me. I just quit following Twitter via Twitterfox, and I never go to the website (same as 80% of other Twitter users.)

A WordPress plug-in posts to Twitter when I put up a new post, so don’t mistake that as being me.

I think Twitter is for those who have a life (or a business to promote.)