I want this car. Actually I want to but a whole bunch and set up a kiosk in the mall to sell them. 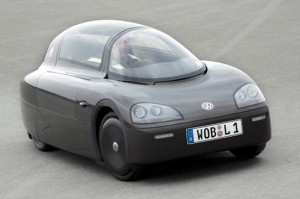 They are Volkswagens and they will be sold in China.

I’m not sure what the airfare is to Shanghai where the cars will first be sold.  BTW: why do all the other countries get all the fun cars first? France had the Smart, India has the TaTa Nano, and now China has the VW VunderWileage (I just made that up.) And by the way?  the U.K. has a much better name for their auto incentive plan, rather than Cash for Clunkers, the U.K. calls it Scrappage Scheme. And another question I need to have settled. How do you pronounce Peugeot? As in…

Back to the unnamed VW.

The car is about 11 feet long,  four feet wide, and about three feet tall.

Obviously it’s a one person car. Which has a lot of appeal for large family. Cars for everybody in the family! The Daily Blonde says she would buy one just for the opportunity to go someplace BY HERSELF. (She has a passle of kiddles.)

As with the Smart five years ago, it’s not legal in the U.S. Nor is the Smart Electric car been approved for U.S. use. But I could call the VW VunderWileage a personal disability device and probably get them imported no prob.

So it’s happened. The 258 miles per gallon car is a reality. Only in China. I accept Paypal.

The power plant is a one cylinder diesel positioned ahead of the rear axle and combined with an automatic shift controlled by a knob in the interior.


Safety was not compromised as the impact and roll-over protection is comparable to the GT racing cars.

Another BTW: If I lived in the U.K. I would shop for cars here.
Perrys
Get the best deals on new cars, used cars and vans. You can search for cars and vans using different criteria. The site has a long list of brands and are authorized and regulated by Financial Services Authority.
The site is easy to navigate and helps you find information about places where you can buy new, used cars, and vans.