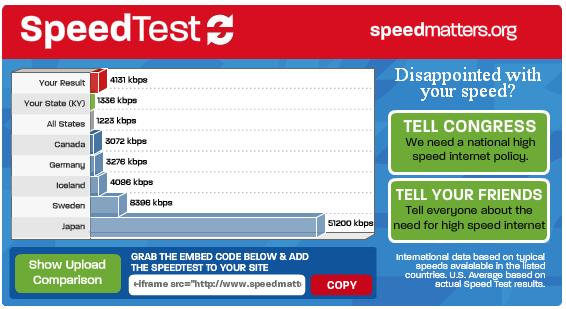 I just ran a speed test on how well I am connected to the internet.

Right now the government is deciding the future of the Internet in the United States.

The Federal Communications Commission is crafting our national high speed internet strategy, which will determine how fast the Internet is and who has access to high speed connections.

Then fill in the form to send a letter to your feral (no typo – little or no contact with real people) representatives. I personalized my letter because Speedmatters.org was just too nice in their letter.

The United States ranks just 15th among industrialized nations in broadband access — and this is costing our economy billions of dollars every year.

That’s because the U.S. has historically invested relatively less on telecommunications than most other major countries. Consumers are charged more for slower speeds, and our current high-speed networks don’t even reach millions of American households.

Like Bubba-Louise, my cousin-sister in Hazard can’t even watch Keyboard Cat, because it won’t download.
H/she needs to see this stuff: