I knew it wouldn’t take long for Dou Lobbs to take after me, the old buzzard. To avoid further controversy about my birthplace, I am publishing – for the first time – my Kenyan birth certificate to keep the birthers at bay.

You will have to click to enlarge to read the faded document – after all Kenyan birther certificates aren’t printed on the best paper. The typewriter used to fill out by Kenyan birther document needed a new ribbon too.

Remember that? Changing typewriter ribbons? Before cartridges? Fingers would get all smudged with ink and you itch your face and walk around all day and nobody tells you “there is a black smudge on your face.” Or what that just me? 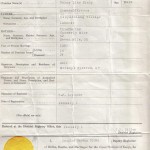 Here are some other moments of “duh”: