Golf will be an official Olympic sport at the 2016 Summer Games.

Here are the loser applicants.

Golf was an Olympic sport in 1900 in Paris and 1904 in St. Louis. I recall them well remember reading about them.

Golf proposes a 72-hole stroke-play Olympic competition for men and women, with 60 players in each field. The world’s top 15 players would qualify automatically.

Except for Goofy Golf events after the season:

The Olympic Golf format should be one players can identify with.

A mixed sex scramble. Include mulligans, tosses, skirts, and have a beer cart. 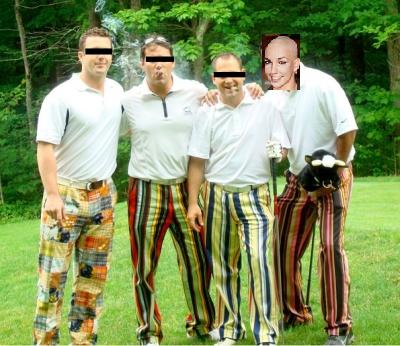 U.S. Team outfitted by LoudMouthGolf of course. (Which solves the problem of letting women play, because they will refuse to be seen on the same links with guys wearing these outfits.)

And fer gawd’s sake: allowing cheering and hazing during Olympic Golf in 2016.