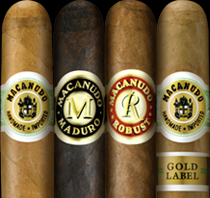 A new best friend at General Cigars decided I was worthy of smoking Macanudo cigars, so he is sending me a sample pack.

I came just *that* close to buying a box of Macanudo cigars, but had not placed the order yet. Since he is sending me a sample pack of Macanudo Café, Maduro, Robust and Gold Label,  I can decide which I like best.

In the meantime, my new best friend is running a contest that I agreed was worth mentioning.

You can win a Million Bucks and invite three friends to hang around two Playboy Playmates.

Actually the latter part of that deal isn’t that big a deal: except I would like to see a Playmate up close and unphotoshopped. I probably would get thrown out of the Playboy Club because I couldn’t resist pointing out the flaws on their skin. Maa-ole. Bloody Mole. Guaca-mole! Just like Austin Powers….

Here’s the deal on the contest…

Macanudo®, is teaming up with Playboy to award one lucky consumer and three guests with the grand prize in the Macanudo Millionaire sweepstakes, an all-expense paid, three-day, two night trip to the Palms Hotel and Casino in Las Vegas.

While in Sin City, the winner and buddies will have a VIP evening at the legendary Playboy Club, where two Playboy Playmates will stand in for Lady Luck when you getss a chance to spin a roulette wheel to win the $1,000,000 prize.

In the contest’s website, Hope Dworaczyk, Playboy’s Miss April 2009, entices Macanudo smokers with the lure of Las Vegas and the chance to win a cool million dollars.

You must be legal smoking age and visit a U.S. tobacco shop between September 14 and October 31, 2009 to buy a specially-marked four-pack containing Macanudo Café, Maduro, Robust and Gold Label cigars. Inside, are details to enter videos, photos and brief essays  about how you need to win the trip to the strip and the $1,000,000 prize.

You can also enter the contest by visiting macanudomillionaire.com or by purchasing cigars through participating online cigar retailers. No purchase necessary. For official rules.

Good luck to us.

If you win, will you invite me? Maybe they won’t throw all of us out when I take a stick and play Whack-a-Mole on Hope Dworaczyk. (Which I’m pretty sure you would pronounce , if-you-touch-her-you-better Hope Divorcecheck is ready.)