Bye-Bye Birdie is reappearing on Broadway after being played in community theaters and high schools for decades after the show closed in 1961. By today’s standards, the 607 Broadway performances would be considered pretty unremarkable.

But add in the tens of thousands of times Bye Bye Birdie has been acted by amateurs and semi-pros and it would be among the elite. 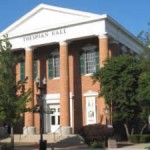 Nancy and I had some fun with a creation of Bye Bye Birdie which played at the Lyric Theater in Boonville, Missouri.

I can’t remember if the official name was Lyric Theater or Thespian Hall back then, but the place has a storied history, and thanks to a very rich man from Kansas City, it was restored from a broken down movie theater to a very nice playhouse now known as Thespian Hall.

Nancy had a part in Bye Bye Birdie, continuing her run of successful stage performances. But enough about her, let’s talk about me.

I had some fun promoting the play.

For background, “Birdie” refers to Conrad Birdie, an Elvis-type, that is leaving for the Army. His publicist decides he should have “one last kiss” before he leaves. Bye Bye Birdie is the story behind the kiss.

I decided that it would be tres-cool if “Conrad Birdie” made a special guest appearance in Boonville before opening night.  “Birdie” made his arrival in a private plane, motorcaded to and through the downtown followed by throngs of squealing teenagers, and performed a couple of songs.

It was all a big put on, well documented by the local newspaper, and remarkably successful if I do say so myself.  All of the participants in the charade were actors in Bye Bye Birdie. Since I had some connections with the newspaper, it was played it as if it was real, and made the front page.

We had the town talking and scratching their heads whether this “Conrad Birdie” actually existed.

He did, but his day job was managing one of the local grocery stores.

Another one of those goofy things young people do and recall as “the good old days.”