Remember the desk Sargent on Hill Street Blues that ended every morning meeting with: Let’s Be Careful Out There?

The NFL (No Fun League) needs to adopt this as their official slogan. As I watched the Colts dismember the Titans, twice personal fouls were called on Tennessee for “roughing the passer.”

Squeeze me? Roughing the passer? Isn’t that what linemen are supposed to do?

The average NFL player plays just 3.52 seasons and loses two to three years off his life expectancy for every season played. Mitz spent six seasons with the Seahawks on top of his four demanding college years at Florida. He knows this could significantly shorten his life.

The NFL is guys made up of guys like Owen Schmitt that played all through college, through rigorous professional training camps, and have the finest equipment to protect them.

Yet, rules are introduced every year to protect them from themselves.

Here’s another new rule: no three man wedge. Squeeze me? How can you make a wedge with two men? And can three men really make a wedge to give the kick/punt returner a huge advantage?

I say, bring back the flying wedge if the NFL really wants to protect the players from harm! 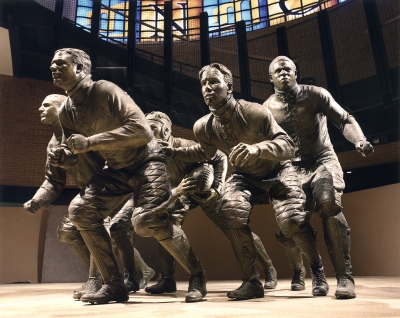 Any league that wants Rush Limbaugh as an owner, better be prepared for some new rules. Rush recently said:

I’m pretty sure Rush sees this as a good thing.

But what do you do with guys like Owen Schmitt?