Cheers to all us thieves! gross doctors! sexy nurses! and toga-wearers!

1. What is your favorite written work of horror fiction?
Lord of the Flies

2. What is your favorite work of science fiction/fantasy?
I liked Twilight Zone, Star Trek, the TeeVee show with Robbie the Robot (Danger Will Robinson) and that kind of stuff. X-Files had some great episodes too. 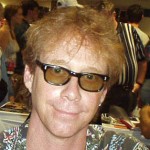 3. Who is your favorite monster?
Scully from Monsters, Inc.

4. What is your favorite Horror movie?
Poltergeist

5. What horror movie gives you the most chills?
Poltergeist, fright chills and sexy chills seeing JoBeth Williams roll around the room in a shortie nightgown shrieking.

6. What character from any horror film would you most like to play?
Hunchback of Notre Dame

7. Freddy or Jason?
I’m not really sure I have seen their backstory to pass judgment.

8. What is your favorite Halloween treat?
Mini Tootsie Rolls

9. Ghosts or goblins?
Ghosts, because they are real, silly.

10. Friendly-faced jack-o’-lantern or scary one?
Scary, but even my attempts at friendly ones are scary, looking like Cousin Billy Sam without her dentures.

11. What is your scariest encounter with the paranormal?
I have the Curse of the Skeptic, so I have had no encounters that have left me impressed. We have tried: Area 51, New Orleans Haunted tours, Vortexes (Vortices?) in AZ, Europo Weekend for The Unimpressed. I’m thinking the hot tent in Sedona is my best shot for my paranormal encounter.

12. Do you believe in ghosts? Why or why not?
Yes, because it’s fun to believe.

13. Would you rather be a zombie, alien, or psycho?
ZAP! Zombie Alien, Psycho!

I would choose Roomba, move mysteriously around seemingly doing nothing only to reveal I was collecting samples for later analysis.

14. Favorite Halloween costume?
Back in the 80s during gas crisis a friend came to a party with a sheet wrapped around his head and body, a necktie around his forehead, carrying a gas can. It was so clever, simple and timely.

16. Person in your family who most likes Halloween (not counting yourself)?
Nancy

17. Are you superstitious?
No, not at all

18. Share an unusual Halloween story.
I have a usual life. I have no unusual stories.
Here’s a boring recollection. I was about eight years old, Trick-eyore-Treating and we found a trail of candy! We followed it and it went for many many houses. This wasn’t a trail like Little Black Sambo left to find the Haunted Mansion, this was a piece of candy every few inches for hundreds of feet. It was heaven, until we discovered that I had been dragging my paper sack on the ground because it was so heavy and the candy was coming out the bottom of my Tricky-eyore-Treat bag.

19. What did you do for Halloween as a kid?
All of it, including vandalism.

20. What’s the best Halloween party that you’ve attended?
The Jaycees put on a Haunted House a couple decades ago and Nancy and I helped decorate and freaked out the kids. The Haunted House was on the second floor of an old office building, so the entrance was up a narrow hallway. People had to wait in the dark hallway and most had worked themselves up for a good scare.
After reaching doorway, everyone had to crawl through a maze of hay bales. A touch here and there would cause screams and screams begat screams.
We had learned that being startled unexpectedly was much more effective than elaborate dioramas to gross people out attempted by the other couples. We put the least work in and had the most fun.