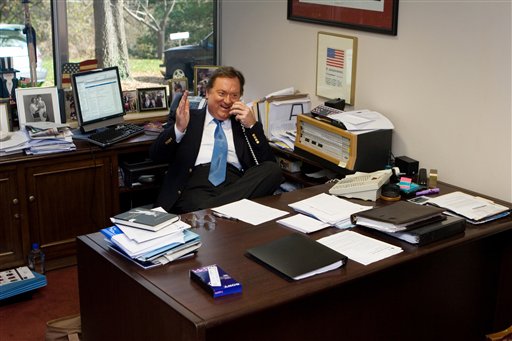 An undated photo provided by the Newseum shows Tim Russert in his office at NBC News in Washington. Russert's office will be reassembled in an exhibit opening next month at the Newseum in Washington and will be on view through 2010. The longtime "Meet the Press" moderator died June 13, 2008 of a heart attack at work.

Tim Russert, the guy from NBC’s Meet the Press. Tim Russert, whose death launched the skyrocketing career of his son Luke Russert and other famous inside-the-beltway kids. Tim Russert who is being canonized by newsers in preparation for his ascension to sit a the right hand of Huntley-Brinkley.

Here’s what I said when he died:

Hyperbole. Over and over and over. Why did Russert have to die at the beginning of the weekend when news is slow? Can we be far from St. Tim of Buffalo? Most bigwigs have settled into a “he was a great journalist” reaction…

Tim Russert has been dead for 18 months. Yet the beltway media dopes just can’t dump enough accolades on his rotting flesh.

“And here children, you see the workspace of a media giant, St. Tim of Buffalo, aka Tim Russert whose life and work brought immense value to the American way of life and who shall be remembered for ever and ever as one of the great pioneers of television journalism talk shows.”