Okeedokee, after being told a decade ago I probably needed (resisted urge to spell that kneaded)  to have my left knee totally replaced, I’m doing it, with the help of Dr. Patton.

I was fifty when I had the first prognosis from Dr. Patton so getting a total knee replacement seemed stupid.

Actually I was told many many decades ago that I would probably have a “highly arthritic” knee as the result of a car wreck.

Which reminds me of a clever word play my Mother told be.

Bruises hurt, Erased afford.  Erector, anaylsis too. Infectious dead. (Click to translate.)
She taught me this probably at the same time she taught me the lyrics to Mairzy Doats – on a very long road trip:


Total knee replacements didn’t even exist back then.  My option then would have been a peg leg. Which of course, is way cooler. I would like a peg leg, wooden shoe? 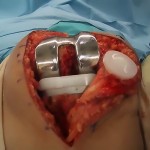 I put off the knee replacement surgery by getting injected with some junk made out of cock’s comb for years.

It’s what the bone cutter recommended. (Little did he know my high ratio of pain to dollars.) He told me that I should put off the surgery as long as possible because if I had it done five years ago and lived until 116, I probably would have to have it done again. The longer I can keep the old joint and not suffer, the better off I would be.

But no more. Knee pain is keeping me from my precious sleep. Well that, and a dog that thinks I’m it’s leaning post, and another one that recently decided a midnight pee is desirable.

I will go under the knife soon and my old joint will be replaced with a new one. Gotta be a marijuana joke there someplace… comment if you have one.

I pondered the surgery and wondered aloud, “if you can have a baby with just a spinal block, why can’t I have my knee replaced with a spinal block?”

Nancy gave a cogent answer, which is rare with all the drugs she is ingesting lately.

“Do you really want to hear them fire up the bone saw?”

And now… the words every blog reader hates to read: I’ll keep you posted on my surgery.