Huh!?! Should I be flattered or insulted that a PR flack sent me a pre-release sneak peek of a movie coming out this spring called Multiple Sarcasms?

It’s a movie about a play about a life that is falling apart.

Huh!?! I may have just moved over to the insulted side again. (Rant about a blog about a life that is falling apart?) 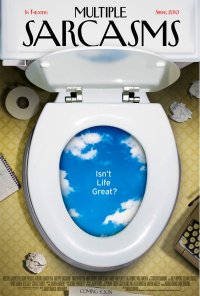 Nah, I’m back to flattered.
Any movie poster featuring a toilet is in my wheelhouse.
Multiple Sarcasms is set in 1979 New York and has an amazing cast including Timothy Hutton, Mira Sorvino, Dana Delany, Mario Van Peeples and Stockard Channing.

Here’s one of the sneak peeks of behind the scenes:

Multiple Sarcasms – Exclusive Behind The Scenes Look
by thatsfunny

Another behind the scenes look:

Multiple Sarcasms – Exclusive Behind The Scenes Look
by thatsfunny

A richly textured drama about self discovery leavened by humor and irony, Multiple Sarcasms follows Gabriel Richmond as he takes an unconventional path to shedding his life of convention by writing a play. As the play becomes about his life, the process proves both disruptive and healing for him as well as his close knit group of family and friends. Drawn into Gabriel’s turmoil, his wife, best friend and business partner begin re-examining their own lives and relationships with him, while others like his daughter and agent provide the stability to help him pull through.

This will be fun!
I don’t mean the film will be fun, (it might have some fun parts from watching the sneak peek, though.)
I mean it will be fun to watch the publicity machine crank into full gear leading up to the inevitable talk show tours pre-release.
And you can say you first learned about it here.
This movie will be a smash.
It has a great ensemble cast delving into topics that are rich in emotions.
Another first…
you read it here first…
Oscar!

And Brooks Branch will be so happy that I launched his movie writing/directing that he will cast me in a small, but pithy, role in his next film and my movie career will be launched.