We live near an interstate and often jump on exit 26 near our house and run down to exit 24 to avoid low-speed traffic. We also like to go to Nashvegas fairly often on the interstate.

And you have wondered the same thing when you are sharing the road with the behemoths of the roadways…
Why aren’t over-the-road trucks more aerodynamic?

Some truck makers and after-market dealers have tried to make the truck more aerodynamic with body panels that knife through the air or swoop it up over the trailer.

But the trailer is the drag, literally! 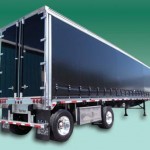 Just look at all that open space under the bed of the truck to capture the air, causing the truck to work harder to drag the wheels along. Tool boxes and air tanks and fuel tanks are never aerodynamically.

I know the trailers are swapped around and tugged by different trucks, so a driver never knows what he will be hooked up to, but since trailers are made only by a couple manufacturers, why haven’t they invested in some R & D to make units more efficient? 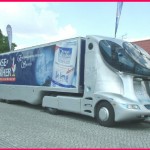 It can’t be that tough to design a trailer that won’t need a trucker to invest in a new hauler to enjoy better efficiency. 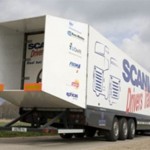 Here’s simple and highly effective way to reduce trailer drag by 7.5%. It’s called the Boattail and was tested in Europe.

The fuel savings, which also means a cut in emissions, were realized by the boat tail dramatically reducing the drag caused by the lower-pressure effect that occurs in the wake of a vehicle.

This will significantly reduce my opportunity to bump-draft the trucks on the interstate, so their 7.5% fuel savings will probably be reflected as a 7.5% cost increase to me.