A single stat has made me feel melancholy. That, and the fact that it’s Michigan cold!

No snarky irreverence today. A friend told me that unemployment in Detroit, Michigan is 50%.
50%.

I’m feeling melancholy because I was born and raised about 100 miles from heart of the city. We visited the Detroit area a lot, mostly Dearborn, a closer suburb, to visit the Henry Ford Museum and Greenfield Village. It was a great place to drag a kid and have me learn something. Old cars, locomotives, demonstrations, and exhibits  from the life and times of Henry Ford and Thomas Edison.

We went fairly regularly to Willow Run airport to pick up my travel-agent Aunt Morna coming home from her world travels. Eventually all commercial service moved to Detroit Metropolitan Airport and we made trips there.

We didn’t go downtown Detroit for any reason other than to see “downtown Detroit.” It was a hustling and bustling city of grand architecture. In other words: boring for a kid.

In the 50s Detroit was 2 million people.

Now it’s half that.

The death of Detroit has been photographically documented. But even one of the websites has fallen to the wayside:  ForgottenDetroit.com hasn’t been updated for four years. 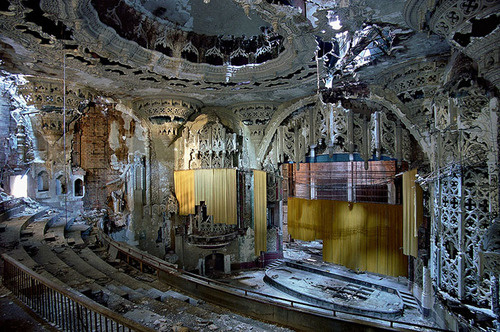 If the abandoned homes are the tip of the iceberg, the commercial buildings are the rest. William Livingston an industrialist who helped make Detroit a great city. His mansion’s declined has been well documented and it was demolished a couple years ago. 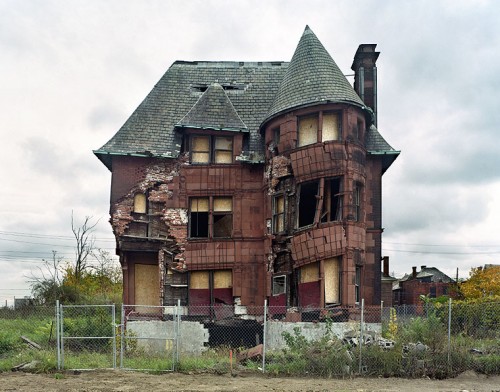 I wasn’t a big fan of Detroit. Since we also visited Chicago (180 miles) almost as often – because of the Museum of Science and Industry, Hayden Planetarium, and Field Museum of Natural History (dinosaurs before they were cool!) I preferred Chicago. Probably because Chicago didn’t smell like auto manufacturing and you couldn’t see the air.