Nooter the Dog has issued an all points bulletin for a stupid mouse. 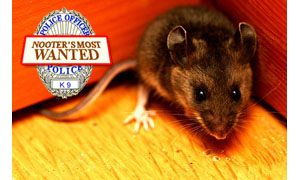 I am now dealing with a Mensa mouse (or God forbid, mice.)

Like Noot, the first clue was the remnants of many enjoyable meals provided by the dog food in the bowls. Nancy can overlook piles and piles of “stuff” on every flat surface in the house, but she can spot a mouse turd at fifty paces.

She pointed out the turds in the living room along the wall that the BATV is mounted on last Saturday.

Under the BATV is a carpeted box that a friend gave us that he used to help his elderly dogs get into bed. He purchased the steps, but they needed a boost. We didn’t need the booster, but it was so nicely carpeted, I thought Derby needed an elevated bed.

After the turd spotting, I lifted the box and uncovered a stash that would have catapulted Geraldo into the stratosphere if Capone’s Vault would have had such treasures.

Unlike Nooter, we had no clue the mice had moved in.

authorities are asking for your help in apprehending their number one suspect- crum e. mouse. crum was seen lurking about the place in recent weeks and has pulled stunts like this before

I bought six of the old-fashioned crush-your-cranium traps and scattered them about, and went to bed. The next day, success! I never felt so good, staring into those lifeless beady little eyes as I flung the critter into the trash bin.

Now, we have Mensa mice/mouse. This mouse/mice will clean the cheese/peanut butter off three traps within six feet of each other twice a day.

One is just a more expensive version of the “snap ‘n’ crush.” Except everything is hidden from sight. Obviously appeals to women. Instructions say to “dispose of trap when mouse is apprehended.” Yeah, $3.50 trap, used once, now trash.  Nice!

(FAIL. I  have that gadget on a window sill so Derby can bark right into the damn thing as he stands on the back of the chair barking at the wind, and he hasn’t twitched once.)

Nooter, my friend, you are not alone in your pursuit of Crum E. Mouse. I hope you are successful. I hope I am successful.

I’ll post pictures, in hopes the other Mensa Mice read this blog.