Nine weeks after my Total Knee Replacement (ta – da – dummmmmmmmm) and I still hurt. Nobody told me this part of the deal. Who do I see about this?

Only after my first couple of sessions did I learn that the only way to gain is with pain – when it comes to a Total Knee Replacement. It’s the only rehab where pain is good. 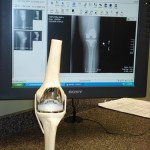 mazing that they can take out a knee that was surrounded by muscles and tendons and stuff and put in a new knee-joint, get me up walking the same day and 56 days later, I’m still hurting.

I know they get in there and hack away with hammers and knives and saws, but didn’t everything go back where it was?

No. The Dupuy Total Knee Replacement is bigger than the original. So the surgeon glued and screwed the joint in,  stuffed everything back in place, stapled it together and sent me to The-rapists to make it work. 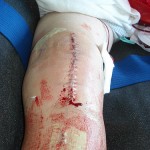 My first day with The-rapist was the second day I got home from the horsepittle, which was three days after surgery.

I knew I was in for a long session with The-rapist when the form  I filled out assessing my needs on a range of 0 – 10, were all 0.

Rare, The-Rapist told me. Usually she doesn’t see patients until 14 days after surgery. I guess The-Rapist will make house calls the first couple weeks.  But the weather was nice then, and I wanted to get out of the house as much as possible.

No movement at all. No muscle movement, no knee flex on the first visit.  The-rapist said they usually like to have 120 degrees flex to consider the Total Knee Replacement (ta -da – dummmmm) satisfactory.

But with Mary Anne’s S & M skills, over the nine weeks I am walking again and have 123 degrees “aided flexion.” 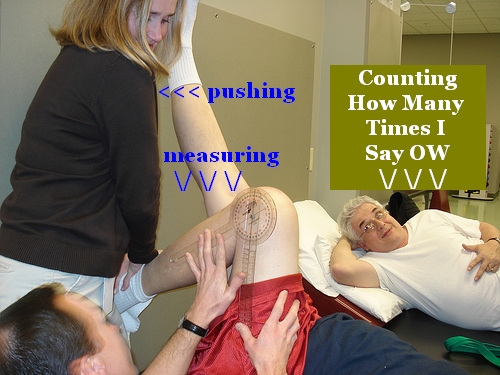 Which means, when Mary Anne pushes as far as I can stand, I have 3 degrees more flex than “satisfactory.” Unaided, which means I take my other foot and push down on my ankle, is about 120 degrees.

And of course, my rate of recovery is being determined by my insurance company. They have said good enough, no more rehab for you bub. So I’ll be pushing on my own leg from now on I guess.

But, damn, my knee hurts. A lot. Still. I’m not sure I have the guts to hurt myself enough to get better.

Suddenly I have a lot more sympathy for those who have chronic pain and muscle degeneration.

I’ll get better. Don’t waste your sympathy on me, think about Laughingboy.

Thanks for your kind comments and encouragement. But move along, nothing to see here.