Catch Her in the Wry has lived in and owned almost every house in her small burg. She is chronicling her life from birth to her Sixty birthday. Our lives are kinda in a parallel universe.

Some of the things we have in common:

etc. etc. A lot of the similarities were because we both were growing up  in small midwest communities.

Her latest post included a picture of one of vast real estate holdings that she occupied: 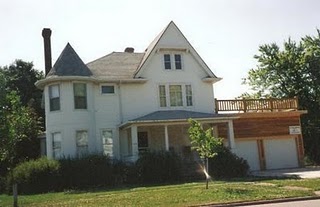 It’s almost identical to a house we owned that I never lived in and Nancy only lived in for 30 days.

Prior to the house like this one, we had lived in a brand-new, 3 bedroom, split foyer home in a new subdivision.

For some reason which escapes me, we decided that we needed to live in this gigantic fixer-upper. We sold our modern house and bought the historic one.

Nancy was 7 months pregnant and corralling a 4-year-old precocious toddler.

The day before we were planning to move, My bosses boss (the owner of the company) asked me if I could meet with them.

Can’t say no to the bosses boss, so I picked up the U-Haul truck and drove it to the office and parked in the street. Bosses Boss (BB) was overly interested in why I had  U-Haul.
“We’re moving” I said matter-of-factly.

But he had this look.

Within the hour, BB had offered me a promotion to a new job in a new town hundreds of miles away. I was replacing a guy that was yet to be fired. They wanted me to start the following week,

BB was shocked because he thought I knew about the offer.

By now it’s mid-morning when I head to the house to consult with Nancy about the offer.

“We’re moving” I said as she greeted me, hands-on-hips with “the look.”

Did I mention we had already sold our existing house and had to give possession that Monday? Not moving wasn’t an option, it was just a question of whether we move across town or cross-country.

We decided to accept the offer and move from Boonville, MO to Monmouth, IL. 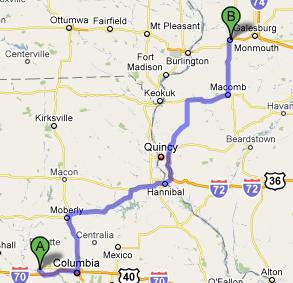 I moved Nancy and Amy into the “cupola” house, stacked all the boxes on the first floor, set up the beds and left to start a new job, in a new town, replacing a boss that had gotten fired the day before my arrival.

Thirty days later, Nancy marshaled a moving company, loaded Bulbous and the new puppy (which just had a hysterectomy) into the Datsun station wagon and followed.

Boonville has lots of fond memories, as does Monmouth. The house I never lived in was quickly, but not easily, forgotten.