I’m trying to do my part to save the environment – when it’s easy and convenient. But I’m not nuts about the new CFL light bulbs.
I like when you first turn them on they are dim, but then as they warm up, they get brighter.
I’m a lot like that.
As the old incandescent bulbs in Villa DeWoof burn out, I am replacing them with CFL bulbs. As you probably have experienced, I have replaced some CFL bulbs already also, despite the promise they would last until the end of the decade.
If they can make a light bulb that is still burning after 109 years, why can’t the new CFL bulbs do the same? 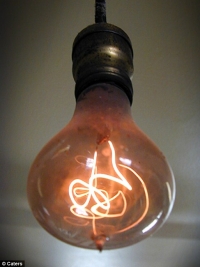 …a 109-year-old light at Fire Station 6 in Livermore, California. Not only has Chailet’s design survived several moves and a multitude of earthquakes, it’s also survived going up in voltage from 110 to 120 volts. It’s indestructible!

My dad used to buy light bulbs by the case for the mill. The sales guy offered a ten-year guarantee. Silly rabbit. Dad had me go around and replace all the perfectly good bulbs with the new ten-year-guaranteed ones. BUT: he had me write the date on the bulb with an indelible grease pencil.

Yes, when the bulbs eventually burned out, he would have me remove the bulb, put it in the original case to save to return for new bulbs when the sales rep came around. I’m pretty sure the sales guy returned once and after swapping out new bulbs for burned out bulbs, probably scratched that stop off his list.

I remember we did have one bulb that Dad said not to replace because it was an original.

It looked a lot like the one above. It was a single bulb hanging from a wire from the ceiling in a central part of the building away from drastic changes in heat and vibrations. The light was never turned off.

No reason to think that bulb couldn’t still be burning today.

BTW: did you see the unbreakable phone get broken at the Consumer Electronic Show? The reaction of the company guy was perfect! He cracked up… just like the phone. (Zip ahead to :50 to see the action)