Remember when a simple majority was enough to get a law made?
Remember when the money you spent at Domino’s couldn’t be used to defeat a lawmaker or an issue?

The Super-majority is now needed in congress to get a law passed.  Senator Mitch McConnell of Kentucky now decides which laws will get passed because he is in control of the 41 Republican Senators. One man, one vote. One man, 41 votes.

So the legislative branch of government is paralyzed.

Does a corporation have to defeat every politician they dislike?

Nope. Only a couple. The rest will get the message: What’s good for GM is good for Congressional campaign funds. 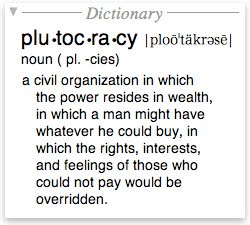 The Supreme Court, in a pure activist move, reached out and grabbed a First Amendment case because the conservative judges wanted to give more power to the very very rich and powerful corporations.

Corporations now have the same rights as the rest of us when it comes to influencing Congress. What about unions you ask? Big difference. Unions get to elect their leaders, so presumably the leaders speak for the majority of the people who are providing the money to influence elections and referendums.

The framers of the Constitution could not have foreseen how big corporations could become.

“Under the majority’s view, I suppose it may be a First Amendment problem that corporations are not permitted to vote, given that voting is, among other things, a form of speech.”

– Supreme Court Justice John Paul Stevens in the dissent on the opinion giving corporations the same freedoms as people.

Tom Monaghan, the founder of Domino’s, is a hard-line activist Catholic. He doesn’t run Domino’s anymore, but if he did there is no reason to believe that he would not have spent a fortune to advance his causes. Money that wasn’t his, it’s shareholder money.

I am a strong believer in the First Amendment.

But the First Amendment protects a person’s rights.

“the corrosive and distorting effects of immense aggregations of wealth that are accumulated with the help of the corporate form and that have little or no correlation to the public’s suport for the corporation’s political ideas.”

So there you have it, 19 years ago corporations were corrosive and distorting. Today they are just another person.