Kentuckians are generally stupider than the rest of the nation.

This is especially clear when it comes to Mother Nature.

You know, of course, that schools and public buildings close on the prediction of snow. Salt brine is applied to dry streets 12-24 hours before the first flake is scheduled to arrive. Everybody runs to Wal-mart to buy white: bread, milk, wine, cigarettes, etc. etc.

When the snow does arrive, it’s balls-to-the-wall panic. The trucks roll out and put rock salt on the streets. Some even have snow blades down and casting a shower of sparks as they rumble through the neighborhoods.

Starting about dawn and until 8 a.m., my corner of Kentucky had this much snow: 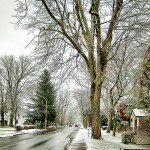 Salting the streets is for the stupid.

Stupid because it snows here every year! Kentuckians can’t learn how to drive snow? Apparently not. The people we elected to think and take care of us issue watches and warnings about the potentially hazardous conditions. And the Tee Vee is ablaze with crawl lines for hours and hours before the first flake.

If I lived in a town where the main source of employment was training 15 year olds how to drive, this would be proper.

Once the temperature falls to the teens or lower (as predicted tonight) salt is ineffective at melting ice. No matter, our care-takers will be diligently salting the roads until our cars look like Margaritas.

It’s pure snowy-stupidity that dominates this time of year.
UPDATE: City Police tweet: Police advise to use caution on the streets today. There are slick spots.