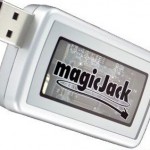 Magic Jack, the doodad that lets you talk free via your computer can function like a cell phone tower.

A really, really short cell tower.
The gizmo is called a femtoJack.

Magic Jack has purred away on my computer for a lotta months and I’m pleased when I have to make a call to Boompa in Bangalore to troubleshoot why my four-year old Dell won’t run Windows 7 from a flash drive.

The new Magic Jack uses radio frequencies for which cellular carriers have paid billions of dollars for exclusive licenses.

Bwahahahahaha, you gotta love it. Magic Jack is sticking it to phone companies again!

YMax Corp., will start selling the gizmo in about four months for $40.

The size of a deck of cards, it plugs into a PC, which needs a broadband Internet connection. The device then detects when a compatible cellphone comes within a few feet and places a call to it. You enters a short code on the phone. The phone is then linked to the Magic Jack and, as long as it’s within range (they say about 3,000 square foot coverage.)
Magic Jack routes the call itself, over the Internet, and not going through the carrier’s cellular tower. No minutes are subtracted from the user’s account with the carrier.
There is a downside, it’s only GSM compatible… meaning AT&T and T-Mobile.

The FCC may come knocking at your door, but Magic Jack swears the gizmo is legal because wireless spectrum licenses don’t extend into the home.