Of course not. Taking a boy to Hooters – as a single act – doesn’t make him a pervert or ingrain a disrespect for women and objectify them.

It takes a village to accomplish that.

Catch Her In the Wry wrote about boys going to Hooters. She made the point… 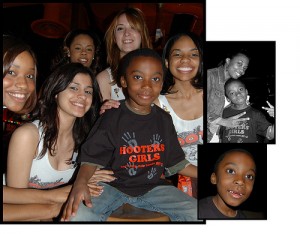 If the picture above showed three 20 something men in loin cloths leaning close in and rubbing themselves on a 14 year old girl, would these parents be so willing to subject their daughters to such atrocity?

Today I read this…

Chicagoland Hooters locations have raised over $385,000 for the Holy Family Lutheran School. On Tuesdays during the month of February, all eleven Chicago-area Hooters Restaurants donate 1/3 of their world-famous chicken wing sales to Holy Family’s Tuition Assistance Fund.

It’s Holy Family Night at Hooters! Bring the children, let them enjoy the breasts and the wings all in the name of God and Family. Praise Jesus and all the little children!


It’s too bad I was raised in the midwest, then I wouldn’t be so titillated by the Hooters Girls and if I had sons I could take them to Hooters too… like a lot of parents do. 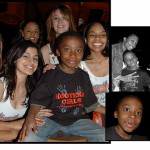 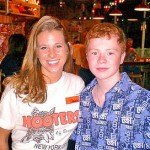 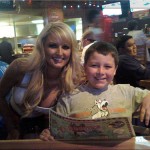 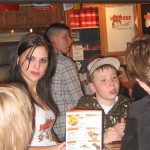 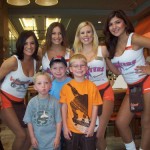 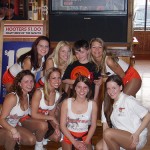 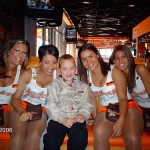 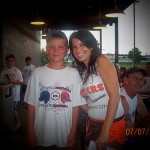 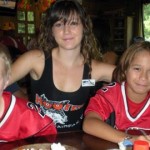 A “Hooters Dad” said it was OK if his daughter was fawned over by a bunch of well endowed men.

I should also ask myself if I would take my 10-year-old daughter to a place that featured muscular men in tight shorts serving her food. I would have no problem with that.

Turns out the Hooters Dad wasn’t so smart after all, his son later said he regretted it because some people who saw him there.

My son told me tonight that he regrets the trip to Hooters. We ran into his football coaches at the restaurant, and they have razzed him about it ever since. “This will take a long time to go away,” he said, adding that “I can see teasing me about it at the next football practice but not three practices later.” I could only tell him, “That’s just what guys do.”

It takes a village to objectify women, because “that’s just what guys do.”
Yeah, parents, coaches, preachers, and pastors and principals.

Note: If you want to read about the ensuing uproar Hooter’s Dad caused, AOL did a follow-up. Out of 42,000+ votes, 72% said it was OK to take kids – any age – to Hooters because it’s a “family restaurant.”