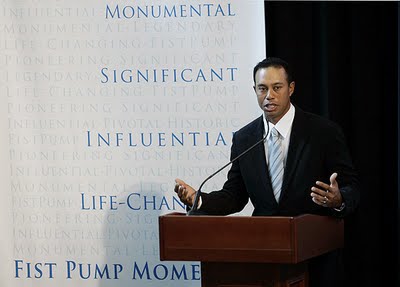 Whoa, that was close.

Because Tiger Wood’s cheated on his wife and then went into hiding, the world came perilously close to stopping.

Tiger Woods apologized for all the pain and suffering he has caused everybody. Including his Mama, his Nordic Combined, his babies, and his yet unborn babies, his dead dad, his dead Escalade, his dead tree, his dead endorsement deals from Accenture, Tag Heuer (which I think is pronounced  Tag “whore”), and some other sponsor I forget…and more.

Tiger Woods is the center of our world. Oh wait, that would make Tiger Woods magma.

Tiger Woods is hot, but  he is not magma.

Woods did not take questions from the assembled press throng.

“Directly to the point there is no one to blame but me for the mess I have put my wife and family through. I accept total and complete responsibility. My wife and I have been trying to work things out but sadly things have not worked out.”

“We have decided to live apart with me having mutually agreed upon times when I can be with our children.”

If Tiger Woods is the universe, then his transgressions (yeah right) made a black hole that we were desperately spinning toward. Without Tiger Woods apology, global warming would have been the least of our worries. Global Anti-gravity would have been our problem.

Oh, anti-gravity, now that might have been fun for a couple days.

If Tracy Morgan has it right, we will be hearing more from Tiger Woods.

Morgan wonders why we still even care about the sex scandal—

“What are we talkin’ about? Tiger. He’s a f-ing golfer. He’s just a f-ing golfer”— and Morgan was offended when Tiger “didn’t admit that he’s black,” he says. “Bullshit. Your father’s name is Earl. Woods. And he drove a white van. He’s black.” Think that’s tasteless? Good. “If I don’t offend somebody, then I’m probably not funny,”